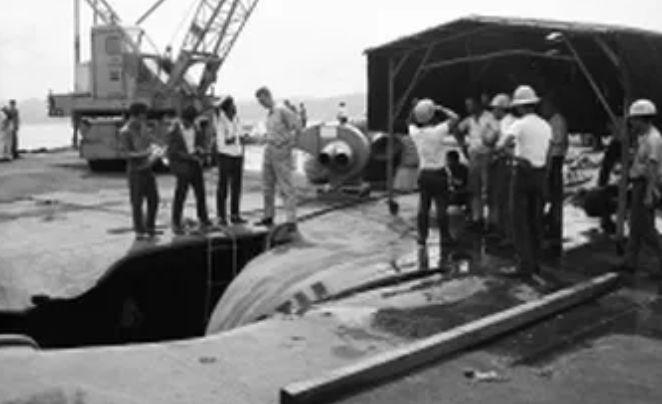 For survivors of a deadly fire aboard the USS Forrestal, the passage of 48 years has not wiped away the pain.

Tears were shed Friday as former shipmates and members of the USS Forrestal Association gathered to remember the 134 sailors killed and the 161 injured when explosions and fire swept across the ship’s flight deck on July 29, 1967.

The Forrestal was America’s first super carrier, a new class of ship constructed at Newport News Shipbuilding and based in Norfolk, pulling combat duty in the Gulf of Tonkin during the Vietnam War. Fighter jets from Forrestal launched the first airstrike into North Vietnam on July 24.

For Walter Stinner, an aviation ordnance man, July 29 began like the previous few days. Rising at 4:30 a.m., he was working on the sweltering flight deck less than two hours later, handling bombs and missiles for the various aircraft.

“The first launch, everything is normal,” he recalled. “Send them off, get ready for the next 15 to 20 birds. Get them loaded up, fueled up and ready for launch.”

It was 10:52 a.m. He loaded his last plane, and then an explosion came out of nowhere.

He turned toward the sound. A stiff wind swept away the initial cloud of black smoke to reveal “a disaster in the making,” he said. “Little did we know in those first few moments what was about to occur.”

A rocket took off from an F-4 Phantom and sped chest-high across the flight deck, striking an A-4 Skyhawk piloted by John McCain, the future Arizona senator and 2008 presidential candidate.

That led to a series of punishing explosions and fires.

Stinner recalled how the steel carrier deck was ripped apart like newspaper, and the force of the disaster rained down upon those sleeping in the decks below — men whom Stinner had relieved that morning.

The New Jersey native was the main speaker at Friday’s ceremony. It was held at the Farrier Fire Fighting School, named in honor of Chief Petty Officer Gerald Farrier. Tapes from the ship’s camera recorded Farrier moving toward the flames with only a CO-2 fire extinguisher before he disappeared in a blinding flash of light.

Lt. j.g. Allen Page, who lives in Norfolk, was sleeping in a lower deck when explosions rocked the ship.

“It was the third thousand-pound bomb, exploding through the deck, that knocked me out of my rack,” he recalled. “I was like, ‘those Vietnamese are getting a carrier!’ I went flying into my ready room, and all I could see on the camera was fire.”

Page nearly broke down in tears as he discussed his memories. And Stinner said he was overcome with emotion as the photos of the 134 killed were flashed on a screen during a short film as an announcer recited their names.

Joe Costello, the association’s memorial chairman, said interest in the reunions has remained strong. Stinner, Page and others are now trying to take up a new cause.

They believe victims of the Forrestal fire should receive a Purple Heart.

The medal is authorized for those who have been killed or wounded in action against an enemy force. Stinner noted the eligibility criteria were expanded recently to include those killed and wounded in the shootings at Fort Hood.

“This is a subject that should be brought up,” Stinner said.

Page agreed. “We were in a war zone. We were getting combat pay.”

However, Congress might have to further amend the criteria if the Forrestal survivors are to succeed. The specific change in the case of Fort Hood — which was initially considered a case of workplace violence — defined what should be considered an attack by a foreign terrorist organization. It now includes those who were communicating with, or inspired by, foreign terrorists.

The Army had determined that the Ford Hood attacker, Army Maj. Nidal Hassan, was communicating with a foreign terrorist group before the massacre.