FDVG Preserves History With A-7 Restoration! 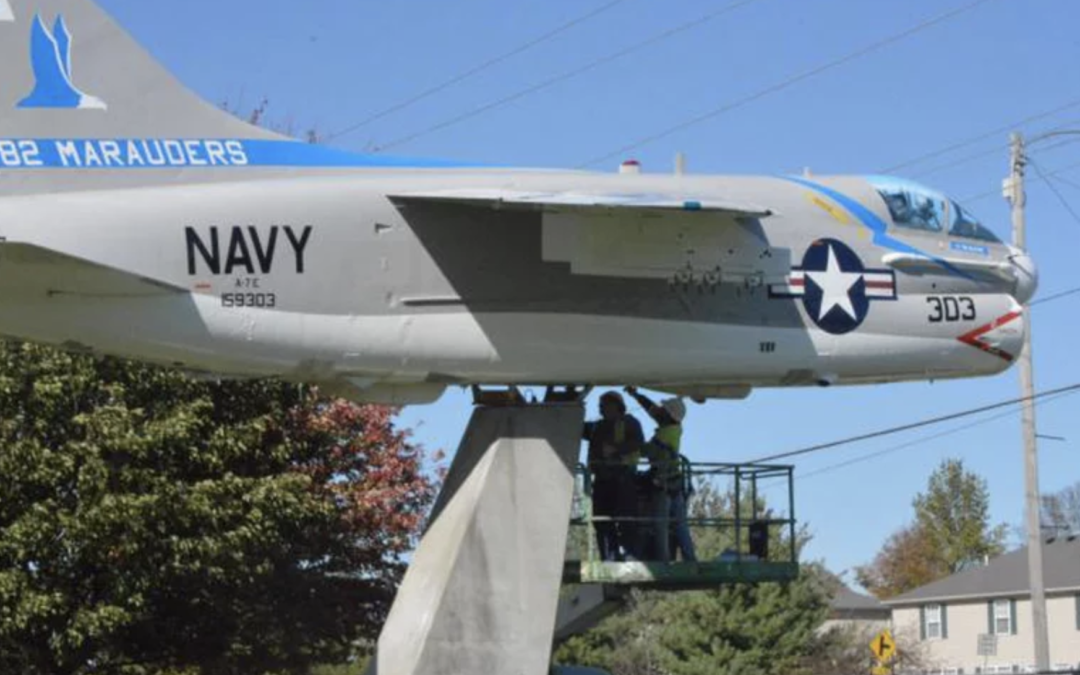 Keller Construction placed the plane back on its display pylon in the morning hours Thursday and by noon, many were showing up to see the new display. Keller donated its time and equipment on both the take down and uplifting back to the pylon. Cars that drove by also noticed the famed Cosair is back and completely restored.

Edwardsville Township Supervisor Frank Miles was ecstatic to see the plane revitalized and back on its permanent perch.

“It means a lot and it is what Edwardsville Township Park is known for,” Miles said. “I was there the day the plane was brought in. I am proud to be part of the effort to restore it and bring it back to its original state. We are able to provide the information on the history of the plane and what it did in service to the country. It was a great and exciting process. I appreciate all the volunteers, the Flight Deck Veterans and all those who donated to the special project.”

Jared Ashley, the CEO and founder of the Flight Deck Veterans organization, was on hand with the volunteers.

Ashley was born in Hobbs, N.M., but was raised in Newnan, Ga., and joined the U.S. Navy Jan. 7, 1997. Stationed in Yokosuka, Japan, he was assigned to the V-1 Division on board the USS Independence from 1997-1998. Jared was honored to be one of the last crew members to walk across the brow after decommissioning the carrier in Bremerton, Wash., in the fall of 1998. In 1999, Jared joined V-1 Division on the USS Kitty Hawk, which replaced the Independence as the new forward deployed aircraft carrier stationed at Yokosuka Naval Base, Yokosuka Japan.

While serving on board the USS Independence and USS Kitty Hawk, Jared did two tours in the Persian Gulf in support of Operation Southern Watch and Desert Fox. Jared got out of the Navy on Jan 7, 2001. and moved to Nashville, Tenn., to work in the music industry as a singer/songwriter. Jared has a wife and young daughter and spends his spare time dedicating himself to the Flight Deck Veterans Group.

“We’re trying restore this A-7 to like new condition so it can be enjoyed in it’s glory,” he said last week. “A part of the Flight Deck Veterans Group mission statement is ‘veterans serving veterans’ and we consider these planes a veteran. We’ve restored a few of them across the country.  All of our have served on the flight deck of an aircraft carrier or within a flight line.

“The reason why we do these restorations is to give our members an opportunity to interact with these planes again. Something that a lot of these guys haven’t done in 30, 40 years. This has been an ongoing project. We’ve been working on this whole thing for about a year now, before it was even taken off the pedestal, just planning.”

The Flight Deck Veterans group confirmed it is a collection of volunteers who worked with these plans and are mostly retired and just came out to help.”

”It’s all volunteers,” he said. “These are veterans who worked with these plans, and they all have jobs or they’re all retired so they come out when they can come out just to help. These guys aren’t getting paid. We do it because we want to save this plane. We want to see this plane last forever. When we’re too old to care there will be other kids here taking care of this plane. What we’re trying to do today is preserve this plane that so that it will be around longer than we will.

“We’re making history today. Our organization developed a process to restore and maintain these planes. This plane has been here 30 years. Hopefully it will last another 30 years. This is the very first one in the country that will be done through this process, so we’re excited about it.  This is the first one we’re doing like this.”

Ashley loved his time in Edwardsville. “It’s a cool town,” he said. “People are nice. The town, they grew up around this plane and they’re sentimental to it, as veterans we’re even more so. We don’t live here so it’s pretty impressive to see the dedication to this plane from civilians who didn’t serve. Now they’re true patriots to us because they’re severing this plane and making sure it gets it’s due diligence.

“We don’t restore any planes that we can’t give it back its identity. That number, 159303, is the bureau number, every plane has it. It’s like a serial number, a birthmark. What we do is we research this planes history. When we started the research we found out that this plane was on the U.S.S Nimitz maiden voyage in 1975. The Nimitz is a historic aircraft carrier.”

“You’ll see these older guys who will be here through the weekend, they get teary eyed. We’ve been posting it on our Flight Deck Veteran page, and a plane captain never forgets his bureau number. He’ll say ‘Hey that’s my plane.’ He’ll get in his car and drive down here. It happens, and they’ll show up and they’ll stand there and cry.”

Ashley said when people leave the military they usually get away, but somewhere along the way, veterans stop and remember “Those were some cherished times in my life.”

“You never can imagine that you’ll be able to mess with a plane like this again. It can be such a small part of you’re life once you get to your sixties. This guy came in here yesterday from the Flight Deck Veterans Group, and said he hasn’t been face to face with one of these since 1975. That’s cool for us. That’s why we do it, for the camaraderie and fellowship.”

Ashley closed by saying: “Now, this plane is going to be known not just in Edwardsville, it’s going to known across the United States because a piece of its history is preserved. Now, guys that served on the Nimitz, guys that served in VA-82, guys that were A-7 pilots, they’re going to stop in Edwardsville to see this plane because now it’s back to it’s old self. That’s why we do what we do. I think the community can appreciate it a little more knowing where it came from.”